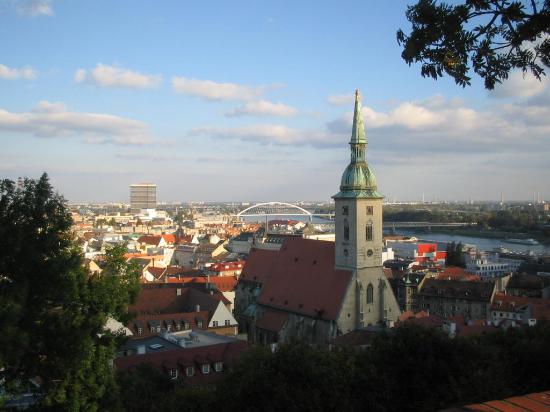 I can’t lie, there was more than one hairy moment in my times traveling in Europe and Australia. Even though really at the end of the day nothing happened to me there was one night that I was scared like no other. That was the evening my train pulled into Bratislava, Slovakia (the nation that was featured in the film “Hostel” ) at around Midnight.

At that time, I wasn’t a particularly experienced traveler – if I were I would have known not to come into a new city at that time… as it is hard to find accommodation that late. As I sat on the train, which for all intents and purposes was my home at that time, I remember feeling like I didn’t want to get off. I just wanted to stay in there in the safe confines of my carriage. Finally, I get to the Brataslava train station, the destination on my ticket, and it is not one of these modern, pretty train stations you find in Munich or Copenhagen… it was run down with an Eastern European decay to it.

Quickly, I got on a pay phone calling the pensions as their weren’t yet hostels in Bratislava in 2001. Each one told me that they’re full, we’re full, seusnue nkaajfnso… the latter of which I obviously couldn’t understand.  So I asked a cab driver if he know of cheap hotels, he said he did. After a ride that took awhile we came to a plush looking hotel. When I walked in and found out they wanted $120 US for a room I walked straight out. That was my budget for 3 or 4 days screw that.

Then the plan came to me, forget this city I am out of here come morning. I’m heading back to the train station and I am going to wait till the earliest trains start running then head on my merry way.

As the cab rolled back to the station, it’s now probably 2 am, I realized the grievous error of my ways. A new “night” cast of characters had begun to form around the now closed station. As I sat myself down on a bench out front, with my backpack all my possessions with me, I could see an eclectic mixture of characters. There were your regular homeless guys in tattered clothes, with weathered – the world has done this to me and it could do it you – faces; prostitutes in clothes about 15 years behind the styles of London with cellulite on their thighs, and yellow smiles; and scariest of all there were some younger toughs wandering around who seemed to talk, and perhaps, guide the prostitutes.

I actually took a key lock I had and locked loop of my jeans to a buckle of my backpack and laid forward in a fetal style position on to my daypack. It was like that I slept perhaps one hour, constantly being alerted by this bizarre high pitched, hyena laugh that made me seek solace by making eye contact with the homeless guys and prostitutes to show them that the laugh scared me too.

All I can say is that station did not open one moment to early and I was back on a train, destination anywhere, with a lesson learned.