People interested in leisure riding and solo trekking will want to stay well away from the Tour De France this summer. Extreme routes such as the Col de Sarenne probably weren’t on the agenda anyway, but the more gentle routes close to the tour will be unavailable as many of the towns and cities near to them will be packed with the massive increase in business from the tourism industry, which will make for a less relaxing experience if stumbled upon by a group not racing for the best jersey. 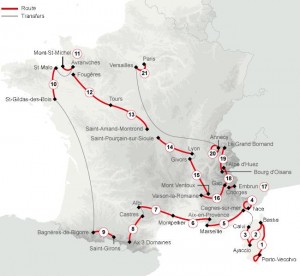 This is a guide to some of the quieter areas in France from June 29th to July 21st for people who want to enjoy their summer cycling holiday without all the crowds.

As you can see from this Guardian route map, the best Tour-free areas are the North-East and South-West of France, the South-West only affected by the transport from Bagnères-de-Bigorre‎ to Saint-Gildas-des-Bois.

Franche-Comté is around 200km North of the nearest Tour route, ensuring a peace-filled summer ride. The area is a rolling mixture of valleys and ridges, curving round rich, agricultural land where the local charm lies in its quiet beauty and an assurance that you probably won’t find any English-speaking pub owners, or, in fact, many English speakers at all. Besançon, the regions capital, prides its understated profile that seems to sit under the radar of many holiday goers, despite being a UNESCO heritage site and official ‘Town of Art and History’.

Expect a leisurely ride around this region, utilising the rivers and gentle slopes between plenty of historic stop-offs to take in all the things you’ve seen. Because of the quiet nature of this destination, it’s perfect for people going in a group of friends of with family.

If visited, keep an eye out for the ‘Little Louvre’ and it’s recommended to try as many of the local cheese & wine as possible.

Burgundy may be closer to the Parisian bustle but you can rely on the local terrain to keep your thoughts on what’s close. The river Yonne and nearby canals offer miles of gentle paths to explore, dotted with medieval architecture, Religious history and, of course, some of the finest viticulture on the continent, all from Pinot Noir or Chardonnay grapes.

Because of the gentle land around Burgundy it’s good for first time cyclists abroad, or seasoned peddlers who don’t want too much exertion under the summer heat. When there, look out for La basilique de Vézelay, the Little Venice of Morvan and any vintage Chablis you may find lying around.

Moving Southwest is the area of Lot, not too far from Bordeaux, it Equals’ the North in culinary delights and easy cycling, although probably more suited to people wanting a longer break as there’s so much to get around!

The Célé Valley is famed for its limestone cliffs with villages perched along the edge, framing a wealth of history, prehistoric art and the freedom of the Parc naturel regional des Causses du Quercy to the west. Other highlights include medieval Figaec, and the architecture of Pont Valentré