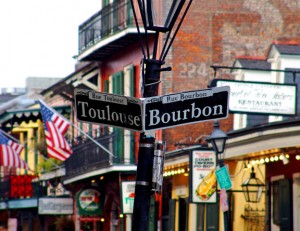 The food is perhaps the only overrated experience of New Orleans. Probably the worst thing about it is its pretended originality. When you read the guidebook you hear stories about the tasty po-boys, the “crawfish étouffée” and the famous gumbo. Well, unfortunately, once you are actually confronted with these different challenges, you may be in for a surprise. While po-boys sounds intriguing (and the name comes from a shortened version of “poor boys”, meaning that everyone could afford these sandwiches), they are actually ordinary American sandwiches, with something fried (meat or seafood) and placed between two large pieces of bread.

When I was about to order the “crawfish étouffée”, I swear that for two split seconds, I almost imagined myself back 300 years at the court of some French marquis or at least a count. I ordered the étouffée, posing in a French accent. What came back was a gumbo of bigger proportions, with a pile of rice in the middle and some crawfish floating about (crawfish are much similar to shrimp, but apparently you have to be very strict with names when it comes to the culinary). Taste: I’ve had better.

The gumbo was supposed to be very similar to the French bouillabaisse. Maybe, if I actually manage to say gumbo with a French accent…I’ve tried it in a couple of different places and somehow, it did not manage to rise above its status of boring stew, even if you ignored its funny taste.

One positive aspect about food in New Orleans: oysters. Not only are they very cheap compared to other cities (roughly about $6 for 6 oysters, a bargain if you consider that oysters in Washington DC are generally about 6 for $12-$14), but they can be served both raw and in different cooked forms, including Oysters Rockefeller (apparently created at Restaurant Antoine’s, at 713 Rue St. Louis, in the French Quarter and named so because of its richness, due to the butter used).