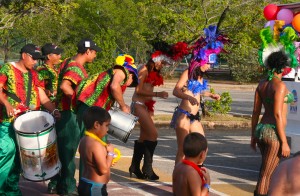 Traditionally, a Catholic festival occurring directly before Lent, carnival celebrations have now become year round, and largely secular events. With their pre-Christian origins in Saturnalia, the excuse to consume all the rich food and drink banned during Lent became a good reason for a riotous party. Even the name itself is likely to have its origins in a corruption of carne vale – Latin for “farewell to meat”!

1) The largest, and probably best-known is the spectacular Rio Carnival. With its origins in the early eighteenth century, this has become the major tourist draw for the region, with approximately 70% of annual revenue being taken in one week from national and foreign visitors. With the major purpose being intense competition between samba schools, elaborate costume planning is a year round event, culminating in showcase parades. Each school presents between six and eight floats, and the participants number in the thousands.

2) Over the last weekend in August each year, with its climax on Bank Holiday Monday, is London’s world-famous Notting Hill Carnival. With its origins in St. Pancras Town Hall in January 1959, this low-key, indoor event was as a direct response to the then state of race relations in London. By 1966, the event had moved outdoors in Notting Hill – a steel band marching through the area drew the largely West Indian residents out of their houses to listen, nostalgic for home. In the mid-1970s, the carnival was sadly notorious for vicious riots, involving local black youths and police. In recent years, it has mellowed into a far more family-orietated and welcoming affair, with over a million attendees.

3) Perhaps the most opulent contender for the carnival throne is the Carnival of Venice. Established in the twelfth century as a defiant response to the loss of autonomous rule, the carnival flourished until the eighteenth century, when Venice once again became the centre of local and national political wrangling, and the carnival declined. Revived by the Italian government in 1979 to bring back the lost traditions and history of the area, the event – famous for its variety of elaborate masks – now attracts approximately three million visitors every year.

4) The Sydney Mardi Gras is probably the world’s premier LGBT festival, and one of Sydney’s biggest tourist draws. Growing from the annual gay rights marches in the 1970s, the contentious arrests of the time have thankfully evolved to serving police officers from the LGBT community actively participating in the parade. The message of the festival is still largely political; in 2011, at least 15 of the participating floats were actively lobbying for gay marriage, and of the 8500 or so entrants, many groups still present a political message.

5) A contender for longest carnival has to be New Orleans, with the season starting directly after Epiphany, and leading right up to Fat Tuesday (Mardi Gras). With its traditional colours of purple, green and gold, the most elaborate parades are concentrated in the last five days. Notable is the police show of clearing upper Bourbon Street directly on the stroke of midnight of Shrove Tuesday!

Since carnivals themselves owe much to ancient bacchanalian celebration, awarding the “wildest” crown is an impossible task!