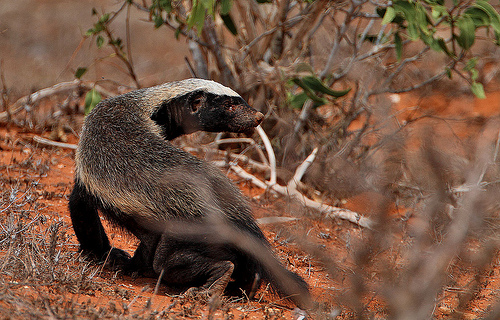 Safari lovers are always keen to get to see the fabled Big Five game animals – lion, leopard, buffalo, elephant and rhino. It’s no wonder – they’re magnificent animals and inspire awe in anyone who is lucky enough to spot them.

However, as we know, the great circle of life requires animals in all shapes and sizes to continue, so here are six of the smaller animals that live in the African wilderness:

This small and ferocious mammal is native to Africa, Southwest Asia and India. It’s got thick skin and a taste for honey (its Afrikaans name, ratel, is possibly derived from the Middle Dutch word honeycomb). It has an interesting partnership with a small bird called the honeyguide, teaming up to feast on bees from wild hives.

These tiny antelope live in habitats with plenty of cover from grass and foliage, and live in specific territories. They stand only 30-40cm (12-16 inches at their shoulder – just barely taller than an African hare, and mate for life. They are noticeable for their alarm call, a shrill whistling sound.

The small-spotted genet is often seen during the day in the rainy season, though it’s primarily nocturnal and native to East Africa. Looking a little like a cat with its long, bushy tail, the genet is genetically closer to the mongoose. However, the genet arches its back and grooms itself in much the same way as a cat. It also purrs, hisses, spits and meows.

A small nocturnal creature, the bushbaby is similar to the monkey in its habits, and is in fact a primate (one of the smallest, at only 7 – 8 inches or 18-20cm). Native to East and sub-Saharan Africa, bushbabies are arboreal and can leap more than 20 feet, stretching its legs and forearms out to assist its flight, between branches.

Hyrax can often be seen sunning themselves on rocky outcrops and despite looking rather similar to a large guinea pig, the hyrax’s nearest living relative is said to be an elephant – due to the fact that they share a remote ancestor as well as a number of anatomical features. Fossil remains indicate that the hyrax was once the size of an ox.

Neither a shrew nor an elephant, the elephant shrew is in fact related to aardvarks, golden moles and tenrecs (its name comes from its long, trunk-like nose. A fast runner, it can leap almost 3 feet in the air. The elephant shrew is found only in central and south-east Africa, including parts of Tanzania, Congo, Zambia and Malawi.

So while you’re out on safari, don’t forget that to look out for creatures both great and small.